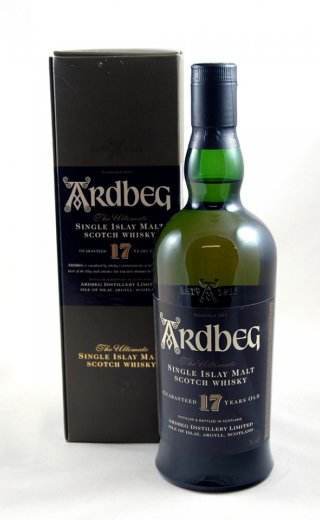 Tastenote titel
Ardbeg 17 is one of the first issues that was launched after that Glenmorangie took over Ardbeg 1997 after been closed for production over many years. Many of you probably know the loved and hated whisky writer Jim Murray and his book Whisky Bible? .... This man certainly had a part in the development of this particular edition back in the days .... but not the latter ones which can be reflected in his scores in his Bible ... you can of course think about what / which editions that has the highest ratings;)
The one I currently got in my glass is the L2 version which is one of the first editions.
Before we begin I can inform you that Ardbeg 17 isn´t exactly what we today might love about Ardbeg. I’m referring to Ardbeg Uigeadail, Corryvreckan etc. etc. with their powerful smokiness. This profile wasn´t meant to be in that way either, and that does not necessary means it lost it´s potential, but instead they were looking for other qualities .... let's go on shall we ..

Doft
Nose:
Starts off with a nice sweet, earthy and very restrained smoke. Almost feels like the smoke only became a waste product in the production. There is also some nice herbs elements in the background and nuttiness.
Smak
Taste:
Smooth and round on the tongue. Relatively sweet and here we get a bit more impact on the smoke that we felt in the nose. It's malty/bread, and the nice fruitiness that we felt on the nose, has been toned down considerably and instead enters a taste of milk chocolate.
Avslut
Finish:
Medium long finish with a slight peppery tones. The texture is for the oily side and the smoke has become sweeter with a touch of lemon. The milk chocolate remains until the end.
Beskrivning / Sammanfattning
I can admit that I was expecting a little bit more of this than what I experienced.
It is not bad…not at all, but also not something that I would jumped out of the chair and High Five the ceiling for, considering that this goes for around 300 Euro on the auctions.
But that's how it is with Ardbeg these days ... they rush high and fast in price and usually ends
up at collectors shelf’s together with the rest of the crew.
However, I will admit that there was much else in the Ardbeg 17 that was very pleasing and this show on the fact that Ardbeg also can be good as Lightly Peated.